Hello All!  Sorry it’s been quite some time since I’ve sat down and taken the time to write.  My life is JUST slowing down now that the boys are home from their school and weeks of summer camp.  Everything is in full swing here, but we will finally have a chance to breathe and enjoy the summer.  School hectic-ness is done for the year, sports teams are all past the finals and Boy Scouts is now on hiatus.  A lot of these things affect my husband’s schedule more than mine and for a bit we were literally ships in the night passing each other on our way in from or out to another of the boys activities.  Phew, what a spring it was! 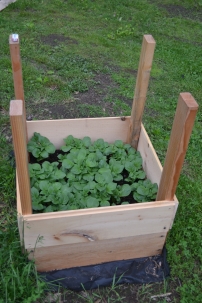 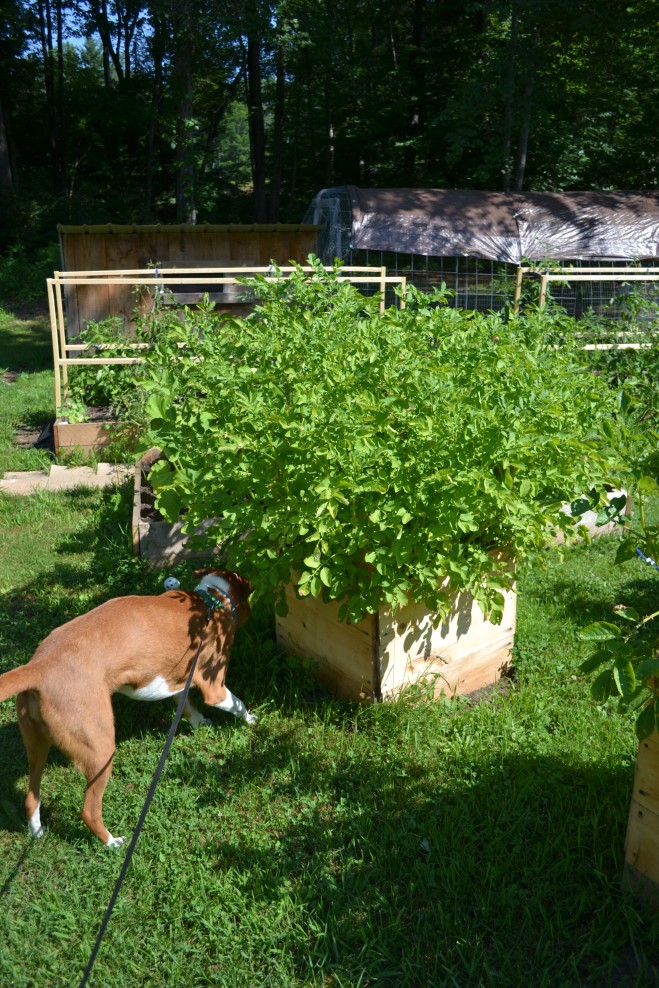 Okay, so I know you’ve all been waiting with bated breath to see how the potato boxes are performing…well, you can see above!  On the top left, we started with layer one, which was about 2 cubic feet of soil in one row of boards.  As they started to grow, we added another row of boards and another 2-3 cubic feet of soil.  The top right shows the first layer where I then added more soil to cover the greens and prompt the potatoes to send out roots for a whole new set of potatoes. The bottom photo shows what it looks like this morning!  This is all theoretical for us as we’ve not started to remove the bottom layer of boards yet to investigate just what is actually happening so far down in the box.  It will be exciting once we do, however!  I love new adventures in growing. 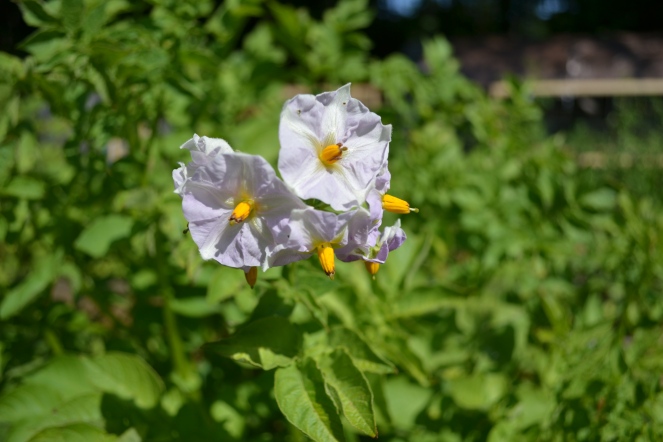 Did you know that potatoes produce flowers? They do!  This is the flower of the “La Ratte” variety potato, aptly named because the potatoes grow in a formation that is a central oblong (loosely rat size) small potato with what looks like babies next to it.  They are a fingerling variety I have grown in the past in a more traditional setting, and they are super delicious and creamy. If you ever get the chance to try one, do so, it is very worth every taste.  So far the best performing grower has been the German Butterball variety, the greens are so full and abundant, but the proof will be once we actually start taking them apart once the greens are dying back so we can see what has produced the most potatoes.

This is the garden as it grows this morning.  Michael made some trellises for me to tie the tomatoes up on, and we were very late getting that done, so there is a lot of growth that has gone everywhere up until now.  The only other thing left to do is trellis the cucumbers which are definitely needing that now as well.  We harvested two from the vines for dinner the other night and they were just delicious!  Since it has been three years since I had a garden, that was a very nice moment for me.  Next ones I harvest will be making some cucumber sandwiches, yum!

My friend, Laura, grows an amazing amount of veggie starts in her little green house.  So, since she’s so wonderfully successful at it…and I am not…she starts some of my goodies when I have a garden each season.  This is just three of the varieties of heirloom tomatoes that I have growing so far.  I can’t wait to taste the purple ones in the middle,  hoping for something a little sweeter then your average tomato.  The last one on the right, you can just barely see in the photo the tiny cherries that this one will be producing.  They are in the Sungold family, so they will be yellow, and I can eat them like candy once they ripen.  I am, however, battling the evil early blight with all of them.  The last time (three years ago) I got superloam compost/soil from the company I got it from again to fill my beds, I ended up with early blight that year, too.  I made the mistake of not mulching the garden at all and so the soil has bounced the blight up onto the tomatoes that weren’t trellised soon enough and it has caused this problem.  My own maintenance fault, unfortunately. I would have purchased the superloam elsewhere except they are the only ones in the area we can guarantee is organic…and organic is super important to me…so we deal with it. Hoping that I’ll get tomatoes in spite of the blight and next year, I will do it better and differently.  And I will find mulching material that isn’t either full of seeds (straw) or poison ivy filled grass clippings, ideally I’d like wood chips, but they are hard to find that will be guaranteed poison ivy free around here.  The poison ivy grows in big rope vines around most the trees in my area. 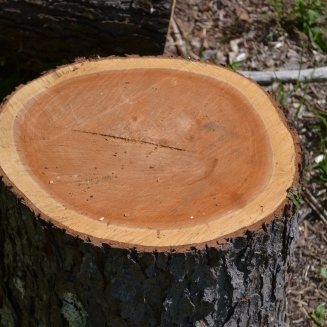 During one of our powerful rain storms back in the spring (and we had a couple!), we had a black cherry tree blow over.  Just snapped the roots which were under the surface only, and the tree toppled over onto our neighbor’s property…taking our split rail fence down with it.  This was a tree that, as you can see from the above pictures, was in good shape, no rot on it.  We were very surprised it fell as quickly as it did, but also made me yet again thankful that we took down the grandmother oak that was next to, and hanging over, our house and garage, when we bought the property.  This black cherry came down with some force and it was a mere amount of what the oak would have been if it had landed on any buildings.  Also very thankful that the black cherry didn’t hit the house, but fell in the opposite direction.  It will make some beautiful firewood, though.  If we had had a way to get it out of there, I would have loved to saw into boards to make something from it, but it was not possible where and the way it fell to remove it in one piece.  I did ask Michael to cut me a slab of one of the rounds so I could make a nice little outdoor table for our chairs with it, I think that will be a nice tribute to it. 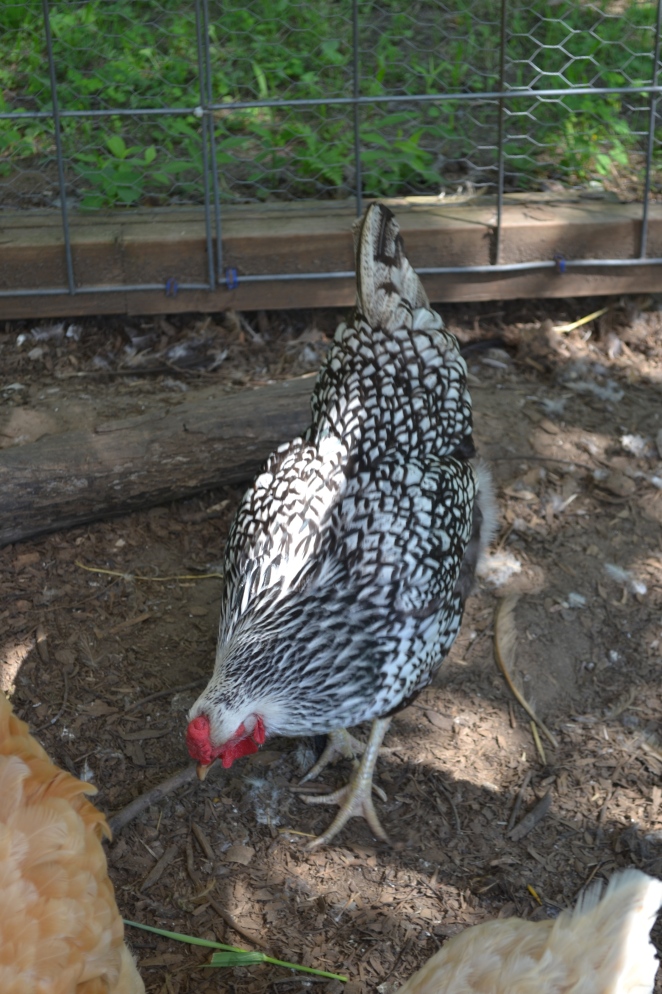 Other than this, and our busy schedules, things here are plugging along on the homestead.  We had the energy audit done and now are deciding on what we would like to accomplish for improvements in insulation and such so that we don’t spend almost $3,500 heating our tiny 1300 sq ft home again this winter!  I really wanted the basement done, but the electric company that matches our funds is not willing to invest any money in that for whatever reason, so it looks like that will need to take a back seat so we can upgrade the insulation in between the ceiling and roof on the second floor and also the walls of the main house. Not a stitch of insulation in any of it besides what we put in when we tore out the kitchen and our bedroom walls.  It’s going to be a big project, but the 1/2 cost up to $4,000 in improvements the electric company will match to do this work, is a huge boost for how much we can have done, so I won’t griping about that.  Nope, not at all.  More on that once we settle on when it will get done.  We won’t be on their schedule until the fall because we’ve gotten a late start on that as well, but we’ll take what we can get before the snow flies. 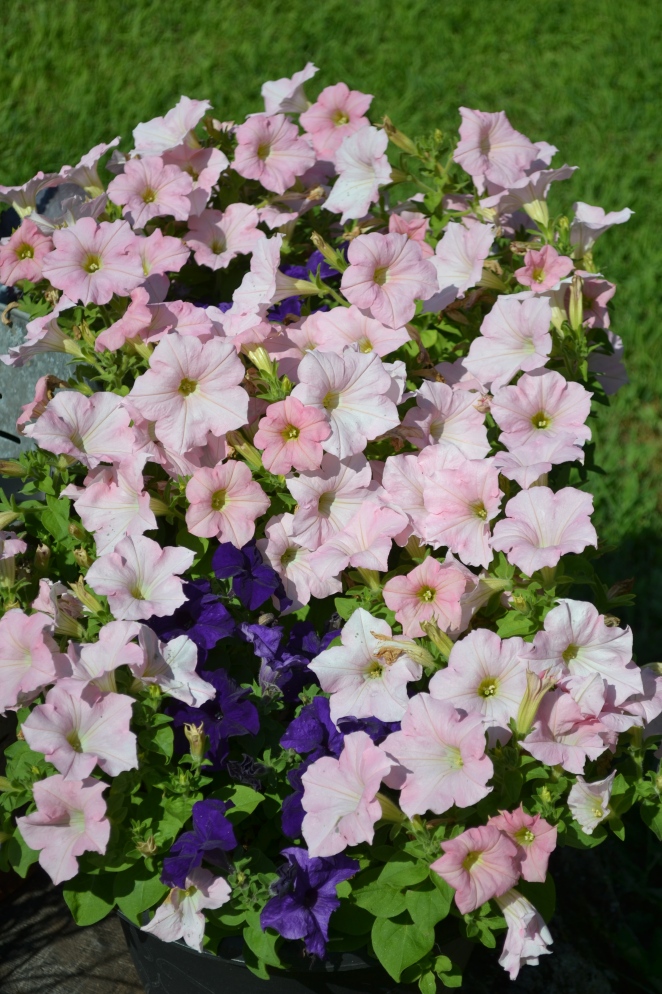 Alright, going to end here!  Soon will be canning season in full swing, so I am enjoying a little respite while I have it.  More on that and also some recipes for the blueberries that I picked this week with my sistah-from-another-mothah, Diane.  This morning’s treat for my menfolk was blueberry coffee cake.  No one was complaining.

Until next time-be well, be kind to each other and blessings to you all.

View all posts by gracenotehomestead

Welcome to the Homestead!

Hi Ya'll! Vonnie here! A little glimpse into the development of our new homestead and our lives on it. 2 Acres, an antique home and the adventures that ensue. Join me as we live our lives on our little homestead pursuing our dreams of creating an authentic, genuine, handmade life. Come on along for the ride, it's gonna be a fun one!